Samoëns is regularly hailed as being the best ski resort you’ve never heard of. Part of the Grand Massif ski area, the 4th largest in France, linking Samoens to the snow-sure resort of Flaine plus Les Carroz, Morillon and Sixt-Fer-à-Cheval. Samoens also has a very popular summer season with a massive list of things to do for adrenalin junkies, families or those wanting to take it easy and relax.  There really is something for everyone and it keeps getting better every year.

Located in the French Alps, Samoëns is in the Giffre valley about an hour from Geneva. Easily accessible by air, road or rail. Find out more about getting here.

Samoëns is more than a ski resort; it’s a real village with a community feel. It has been awarded a coveted ‘Coq d’Or’ (the prestigious Golden Rooster award) for being one of the prettiest villages in France. Furthermore, it boasts an art-cultural authenticity; once a stone cutting centre, Samoens has preserved its historical inheritance, being the only French ski resort to be listed as a ‘Monument Historique’.

The Telegraph in 2012 described Samoëns as ‘enchanting’ and noted it to be possibly the best ski resort in France… And this hidden gem has only become more attractive with each season, while maintaining its rustic charm. Just to set the scene, in the village square resides a preserved lime tree, which is surrounded by the gothic church, medieval water fountain the unique La Jaÿsinia botanical gardens, bars, restaurants – both traditional Savoyarde and European, grotto-like clothes and trinket shops, patisseries and a vast covered ice skating arena (new in 2015) which also hosts ice hockey matches and entertainment for families throughout the seasons. With the hubbub of the Wednesday market that brings this village to life, you’d agree that Samoëns is much more than a winter ski resort, it is a real community, all year round.

Samoëns has been voted “The best small resort in Europe” by the renowned and well respected Hardy’s Skiing and Snowboarding Guide. Find out more about Skiing and the winter season in Samoëns.

Want to know more? Find out about secret Samoëns!

Plus, see our map of favourite places and essentials 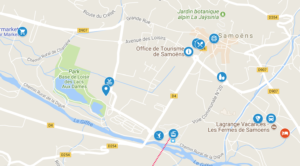